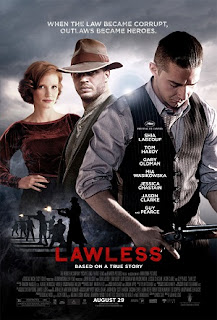 Lawless is a movie that I have been looking forward to seeing for a very long time. John Hillcoat made one of the best Westerns ever with The Proposition and has now made one of most solid crime movies in the last decade. Bringing in some of the best young talent in Hollywood really helped him bring the story to life. The cast consisting of Tom Hardy, Shia LaBouf, Jason Clarke, Jessica Chastain, and Guy Pearce is one of the most star studded cast to be assembled in some time and makes this movie an instant Academy Award contender.

Lawless tells the real life story of the Bondurant brothers during Prohibition Era Virginia. The brothers, Jack(LaBouf), Howard(Clarke), and Forrest(Hardy) are bootleggers in Franklin County, Virginia and business is booming. The use their bar as a front for their operation and manage to keep a pretty low profile overall. Jack, the younger brother, witness a murder by a gangster and he begins to have aspirations of expanding the business to make more money. At the same time, Special Deputy Rakes(Pearce), is brought in to get a cut of the profits from all of the different bootleggers. Forrest comes into direct conflict with Rakes and the story becomes an epic crime drama.

The acting in this movie is off the charts good and is the real main attraction of the movie. Tom Hardy is as good as ever and he brings the character of Forrest to life with a ferocious intensity in every single scene that he is in. You can see how guarded this character is and how much he cares about the people around him and at the same time he has no qualms about killing rival gangsters who threaten his life. His story really was the most interesting in the movie and his chemistry with Jessica Chastain was impressive to say the least. Chastain seems to get better with every new role that she is in and even in her limited screen time she is still one of the best parts of the movie. The movie is also shot beautifully with Hillcoat handling action scenes as deftly as the quieter dramatic scenes.

Shia LaBouf is overshadowed by the greatness of Tom Hardy but he was still very solid in the movie. They did play up the occasional douchiness of his character but it really is a young man going through the growing pains of becoming a man. He does a great job of sharing the spotlight with Hardy and this is his first real "grown up" role in a quality movie. It was refreshing to see him acting alongside real people instead of crappy CG robots. Jason Clarke seemed to be the odd man out in the trio, because his character is the least developed and is relegated to the role of the protector in the movie. Clarke is an incredibly gifted actor but he has never really received his due but he seems to be getting close with roles in Public Enemies and Lawless.

After hearing all of the reviews of this movie, my expectations were a little bit lower than they originally were. Having seen this movie I can confirm that this movie is awesome and was one of the best movies that I have seen this year. Hardy's award worthy performance was the highlight of the film and again show why he is one of the top actor in Hollywood currently. Shia LaBouf also chimes in with a solid performance that would surprise most movie fans after seeing his other movies. Check this movie out On Demand, or on Blu-Ray.
Posted by Unknown at 1:17 AM