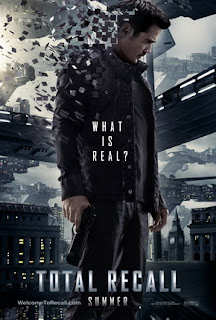 I am extremely pumped for this adaptation of Total Recall. It is the serious version of Philip K. Dick's original source material, We Can Remember It For You Wholesale. Having Colin Farrell in the lead role coming off of his last two roles in Horrible Bosses and Fright Night was a great choice as he is the best part of each of those movies. Easing him back into major starring roles is a solid choice. Bryan Cranston, Jessica Biel, and Kate Beckinsale round out the cast. Seeing Cranston cast as the main bad guy in a film is amazing and anyone who has ever seen Breaking Bad knows that he can totally handle playing a complete shitbag human being. I am sure that Biel and Beckinsale will provide solid performances as well. Even if they end up not sticking to the source material, I'm sure the story will be solid, because you can't get much worse than what was released in theaters over the last year in terms of science fiction (Apollo 18 and The Darkest Hour). The visual style looks awesome and with solid casting decisions, this looks like it could be a home run.


Verdict
THIS IS AN A+ TRAILER


It does exactly what it needs to do and gets you super pumped for the movie. And it gives you enough story elements to get you interested as well.