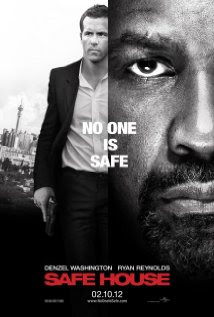 This is a pretty generic action movie but it still has enough action and suspense to get you jacked up. You can see the twists coming from a mile away and that is the way these movies are generally crafted, so nothing really comes as a surprise. The only thing that differentiates action thrillers from each other is the characters that it introduces throughout the movie. Having Denzel Washington and Ryan Reynolds as the two main characters is something that the movie really has going for it. Denzel is as solid as always but he may want to start picking different types of movies because in his last four or five movies his characters have almost been identical to each other except for a few details here and there. Reynolds coming off of two absolute bombs in  2011 (Green Lantern and The Change-Up), definitely brought a solid performance to the table. His take on the "rookie" agent was refreshing because he was more like a student, learning from each situation he was in and using the info he gained in later situations. Having those two in the movie alone raises this above most action thrillers that come on the market. Give it a shot, it is worth a rental due to the two solid leads and the above average action scenes.


Safe House is really only worth a rental. This is a movie that you will probably not watch more than once and it really doesn't deserve repeat viewings. Give it a rental and have a good time watching it because this is one you will forget about 10 minutes after the movie is over.
Posted by Unknown at 10:29 PM