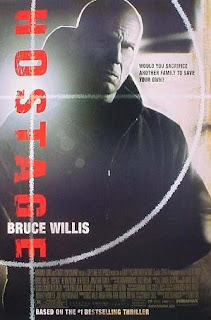 Hostage is one of those Bruce Willis movies that a lot of people tend to forget about. It is easily one of his best performances in years and has one of the more complicated plots that appear in a Bruce Willis movie. This is about as dramatic a movie that Bruce Willis will appear in over the course of his career and he had some great supporting characters to help bolster his performance. Ben Foster is a force of nature in this film, he is awesome in every scene he is in. The rest of the supporting cast is pretty solid as well  with Kevin Pollak, Kim Coates, and Jonathan Tucker playing some of the smaller supporting roles.

The director of the movie, Florent Emilio Siri, directed this movie to be an art house version of Die Hard and in a way that is what it really is. The main character could have been swapped for John McClane and the movie would have been pretty much identical. It was definitely a good choice because the Die Hard movie are all great movies and crafting your movie in that light is a solid design choice. Willis does show a decent amount of range in the movie and he really has to sell his character's anguish over a failed hostage situation. Ben Foster on the other hand kills it in every scene in this movie, his character is just plain fucked up and every time you see him you feel slightly uncomfortable. He is a seemingly heartless character and is just a force of brutal terror. He is one of the most terrifying human characters in any movie because he has no conscience and just wants to kill and destroy. There must have been some fucked up shit that went on during his childhood to make him that way. Just messed up in every way

Worth at least a rental.

This is a solid Die Hard clone that definitely deserves a viewing just for the performance of Ben Foster. The visual style of the movie is solid as well and the action is exceptional, the movie is also pretty brutal on the whole.
Posted by Unknown at 3:59 PM