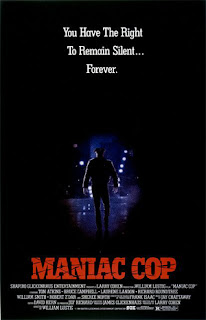 I will pretty much watch anything that stars Bruce Campbell, this has led to me watching a lot of Burn Notice (unfortunately). He seems to be the one solid thing in every production that he is in and he never seem hokey to me, but he may come off as cheesy to others. Maniac Cop was his follow up to The Evil Dead II and it was a slasher/cop movie about a crazed cop that just butchered people in New York City. And I can tell you that it is fucking glorious. This movie is just so over the top and brutal that it is just begging to be seen at Midnight movie shows across the country.

The movie brings together Bruce Campbell, fresh off his role as Ash in the Evil Dead films, and Tom Atkins, who was coming off his role in Night of the Creeps (another excellent 80's horror movie). They play off of each other extremely well in the movie and for the most part the plot is engaging. It starts to get a little weird when you get a close up of the killer in the movie and he just looks odd and goofy which kind of takes away from the effectiveness of the movie in a small way. If you actually do watch this movie, I just want you to know that the way the killer looks in the movie is the way he actually looks like in real life (minus the scars). The fact that man looks the way he does is scarier than anything in the movie itself.

Pretty much anything Bruce Campbell is involved in becomes a cult classic such as The Evil Dead, Evil Dead 2, Army of Darkness, Maniac Cop, Bubba Ho-Tep, My Name is Bruce, and The Man with the Screaming Brain. In many of these roles he plays a very over the top characters but he always grounds them with an everyman quality that he brings to the screen. His best performance is in Bubba Ho-Tep because he does a pretty spot on Elvis Presley impersonation and he crushed it throughout the entire movie.

WATCH IT IF YOU ARE A FAN OF CHEESY 80's SLASHER MOVIES.

Watch this if you are a fan of Bruce Campbell or like cheesy slasher movies, it will definitely satisfy both parties. Campbell gives a solid performance throughout and the kills in most scenes are pretty brutal and will keep gore hounds happy.
Posted by Unknown at 9:32 PM