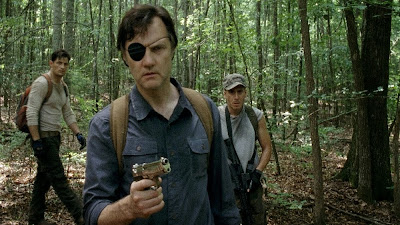 About time this happened.  These last two episodes that were focused on him solely felt like a time-out in the progress of the season.  I understand why the show did this, but his arc was so quick I could have used more time seeing him portray Brian.  Alas, the man is back, in charge, and wanting revenge on everyone.

The episode starts with a back and forth between Meghan and The Governor, and Martinez and The Governor.  His initial talks with Martinez are tense and show anger between the two.  His talk with Meghan though gets his brain moving towards making the next move in life.  This was the first sign that he was back and ready to make moves.  After a supply run that some good walker deaths they were back at camp.  Martinez made a joke while using the golf clubs from Woodbury about sharing leadership with The Governor.  Needless to say The Governor didn’t find it funny and that was all she wrote for Martinez.  It was a beautiful death and words will do it no justice.  The acting was superb and the scene was great.

The Governor tried to leave before anything else happened.  He gathered up his new family, including Tara’s new girl fling, and they all drove out in the middle of the night.  Soon enough they were stopped by a slew of walkers stuck in quicksand like mud in the middle of the road.  Some great make up work here as the walkers have only been getting better as the season has gone on.  Having to go back to the camp, The Governor decides it is time to take charge.

With a brutal death to Pete and a decision to see if he can get Mitch on his side, Pete’s brother, The Governor takes full reign of the camp.  The theme again has been can you ever come back from something and still be who you once were.  The Governor clearly can go straight back into his all-out crazy mode of controlling everything and being the leader again, despite the look of him not really wanting to take the mantel.

Of course he knows of a place to keep everyone safe and we get a great ending to the episode with him secretly spying on the prison.  With a raise of his gun, the episode cuts to black in a great cliff-hanger to the last episode of the year.  It seems as if he will do everything in his power to keep Meghan, Tara, and Lily safe.  I think the last episode of the year is going to be explosive, exciting, and see many deaths from some of the regulars we have come to know and love.
Posted by Unknown at 8:26 PM