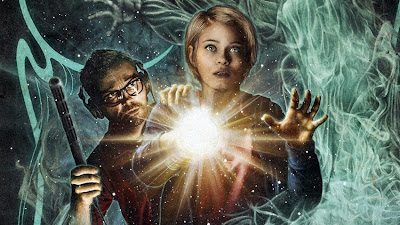 The Innkeepers harkens back to the classic ghost movies of yesteryear, such as Poltergeist, and modern marvels such as Insidious. Director Ti West has become of the best young independent horror directors in the industry, and this is another feather in his cap. The Innkeepers doesn't overly concern itself with over the top gore or jump scares, it is a slow-burning haunted house tale.This is a very different movie from all of the gore fests that have come out over the past decade, The Innkeepers concerns itself with the story and characters first rather than worry about the way the ghosts will look of the effects it will have in it. This is a style that is sorely lacking in Hollywood for the most part because it doesn't necessarily sell to the masses.

The Innkeepers tells the tale of Claire (Sara Paxton) and Luke (Pat Healy), who work at The Pedlar's Inn  which is on it last weekend of being open. There was a woman, Madeline O'Malley, who hanged herself in the inn in the 1800's and many of the people in the inn have seen her ghost. Claire and Luke are very interested in "Ghost Hunting" and try and document all of the different events that go on in the inn. From little things such as a piano playing itself or even doors closing on their own there are little things that support the notion that there is a ghost in the inn. Claire starts to become overly paranoid after she starts to witness things that she attributes to the ghost of Madeline O'Malley.From that point forth it is a tale of trying to find the truth about what happened in the inn and how they can make it out of there alive.

This is exactly the type of horror movie that I loved as a kid. There is almost no gore to speak of and it uses all of these small scary events to set the mood and establish fear in the viewer. The two main characters in the movie, Claire and Luke, are also extremely likable because they seem like just normal people. They both seem like outsiders and are never at odds with each other and they both like each other. You can tell that they like each other on a deeper level but they never act on it. This is one of the better ghost stories that I have seen over the last few years and it is a step blow movie like Insidious or Poltergeist. The only thing it doesn't do that those other movies do is create an iconic or long lasting villain. It is also a tad slower than most movies which takes its toll on the effectiveness of the movie because it take such a long time to get to the meat of the movie.

This is a very good haunted house movie and is a great little independent movie. Sara Paxton also does a wonderful job of carrying the movie on her shoulders. She is extremely beautiful in every movie that she is in but they manage to make her look like a plain Jane and just like a normal person. Her chemistry with Healy is great in the movie and really carries the movie along. This is a very good ghost story and deserves to be seen by horror movie enthusiasts.

I am a huge fan of haunted house movies/stories and have really grown to appreciate the skill needed to make one successful. Anyone can take a group of people, throw them in a creepy setting, and add ghosts. It doesn't mean that the movie is going to be scary but that is why over-the-top gore is used heavily to compensate for shit stories in many cases. West has become a modern master in horror storytelling and you can see that first hand in this movie and in House of the Devil. He has made these movies scary by using setting, story, and having the ability to use these to fill every frame with a sense of dread. The bottom line is that if you are a fan of horror movies, you should be watching this movie right now. If you are not a fan of horror movies, you should still give this one a shot.