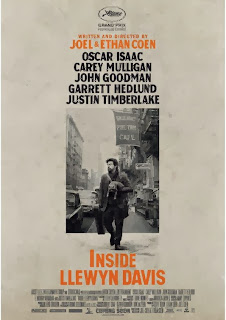 The Coen brothers are arguably the most consistent American directors of the last 2 decades. They have a tendency to make fantastic movies about individuals who are complete underachievers. We've seen it in Raising Arizona, The Big Lebowski, and A Serious Man. The Coens have now given us the pleasure of seeing another spectacular underachiever with Inside Llewyn Davis.

Llewyn Davis (Oscar Isaac) is a struggling folk singer living in New York City in the early 1960s. His singing partner, Mike, has recently committed suicide and left Llewyn to pick up the pieces of his struggling career. He is a freeloader of epic proportions, bouncing from couch to couch across the city, preying on the giving nature of his “friends”. He is a jerk to everyone around him and scrapes by on performing a couple of gigs here and there while trying to promote his solo album, Inside Llewyn Davis. He desperately wants to succeed at his craft but he is constantly sabotaging himself by only focusing on the short-term rather than the long-term.

This movie is an experience, we get to see and feel the full array of emotions over the run time of the film. The Coens give us a glimpse into one man’s seemingly crappy existence and we get to see his ups and downs, and it is magnificent. There is no main goal to the story, no maniacal villain, and no damsel in distress. It is a movie about a man struggling with his dreams and his inability to make good decisions. I think the reason that I loved this movie so much is due to the fact that Llewyn’s life seems incredibly relatable, with his lack of direction and the cyclical nature of his life. He loves being a musician but is completely unwilling to bend in his beliefs to become successful and lacks the decision-making skills to counter his lack of adaptability. He is simply doomed to make the same mistakes over and over.

Oscar Isaac gives a breakout performance as the titular character, and handles singing duties to go along with his incredible acting performance. I believe the greatest aspect of his performance is his ability to make a mostly unlikable character and turn him into an endearing character that you constantly root for, but he is still a massive asshole. He is a dick to almost everyone that he comes into contact with but the people around him continue to love him, no matter how horribly he acts towards them. Oscar also has some serious singing chops and he infuses each performance with a staggering amount of emotion, and makes you feel the pain that come out in his character feels.

The supporting characters are solid as well with Justin Timberlake and Carey Mulligan playing a singing duo, Jim and Jean, who are Llewyn’s closest friends. Mulligan spends most of her time being completely pissed off at Llewyn but also has some touching moments with him as well. Timberlake’s character just exists in the movie and is not given a ton of scenes to fully develop but he isn’t the focus of the movie. The real scene stealer is John Goodman, returning to the Coens after 13 years. He plays a jazz musician, whom Llewyn hitches, a ride with to Chicago. The jabs that his character and Llewyn exchange are some of the best in the movie.

Inside Llewyn Davis revels in its main characters misery. There are no over the top situations or a huge dramatic conclusion. We simply get a magnificently filmed glimpse into the life of a chronically underachieving artist. The low-key tone of this movie was done perfectly by the Coen Brothers and continues their string of masterpieces that hopefully lasts for decades to come.

Inside Llewyn Davis doesn’t have the memorable lines of The Big Lebowski and Raising Arizona, or the memorable characters of Fargo and No Country for Old Men, but it is masterpiece nonetheless. This is another masterful addition to the Coen Brothers’ movie resume, I can't wait to see what they have up their sleeve for us in the future.
Posted by Unknown at 10:03 PM