The Walking Dead- "Miles Behind Us" 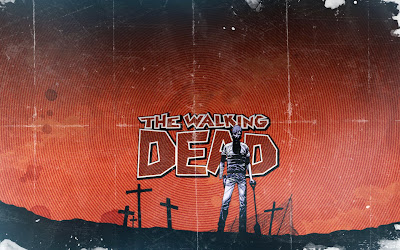 Now we move onto the second arc of The Walking Dead, Miles Behind Us. For people just beginning to read the series after watching the show, this arc is the basis for the second season of the AMC show. Just keep in mind if you plan on reading "Miles Behind Us", that it is completely different than the show. You will realize how superior the comic series is after you read this arc.

This arc leaves us with Rick and the group of survivors searching for a new place to live. They find what they think is a safe gated community, that they quickly realize is infested with zombies after one of their own is taken down. While in the community, a new set of survivors is brought into the mix. We are introduced to the badass known as Tyreese, as well as his daughter and her idiot boyfriend. The group then moves onto a farm after another near tragedy and shacks up with Herschel and his family for a few issues.

The interesting thing about this arc is that there is no villain or any real presentable danger to the group. After being chased out of the gated community, they find Herschel's farm and then spend the rest of the time getting to know each other. I have seen where this series goes and this portion of the series really serves as a calm before the storm. Most of the pages are spent getting the characters more familiar with each other. There is also a sizable jump in time from the first arc to this one, with several months passing. There is still the weight of the deaths from the first few issues on the group, and it is examined a few times. That is what makes this series so special, it is not just about zombies but how people are affected by this crazy situation.

I thought Herschel had a hard time in the TV series accepting that there was no cure for the zombie virus, but in the comic series he seems like a belligerent idiot at times. You have to keep in mind that a large portion of his family is still alive at this point and he has several more children. His idiocy leads to the death of more than a few people. He is not the moral center of any group in the comic series and the only reason people love this character is because of the TV show. Most of the time in the comic he is just a pile of uselessness with a shit attitude.

This arc was a way for Robert Kirkman to get us acquainted with the cast before he brought them to the prison, which is where the series really begins to take off into greatness. I never got the sense that any of the main cast of characters was in any real danger. This is a necessary evil when a writer has a long term plan in place, and seeing where this series goes just reaffirms my belief in my previous statement. Keep picking up the graphic novels until you catch up with where the series is currently. The series just keeps getting better and better. With no endgame in sight, I am excited for the series every single time a new issue comes out.