The Following- "Whips and Regret" 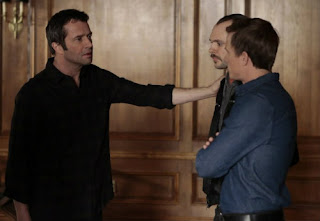 "Whips and Regret" didn't bring the same level of excitement that has been present in the past few episodes. we got another "Follower of the Week", this time following the douchey redneck militia asshole. His character served no true purpose except to expose that Joe's "flock" is somewhat fractured. You have people who are mainly following Roderick and others that are solely following Joe. This is going to be a major plot point for the series from this point on because Roderick is not afraid to openly question Joe because he feels like they are in this together whereas Joe feels like everyone is there to serve his needs. Big things are going to come from this in the future.

Ryan didn't really do much this week except send a generic bunch of psychos to a meeting with the Grim Reaper. I love when he is allowed to be snarky and when we don't see that it takes away from his scenes, this episode featured a very mopey Ryan. He got to have some sexy time with Joe's "Angel of Death" and this episode was a whole lot of setup, more on the followers' side though. The whole FBI plot did nothing to further their story and they ended up in the same place they began. Just a weak week for the FBI storyline. Hopefully with the return of Weston next week, this plot will begin to heat up again.

Jacob had another solid outing and his change in the past few weeks has been pretty jarring. He wasn't even able to hit a person a few episodes ago and now he is threatening to beat the shit out of Claire and threatened to murder Emma, to her face. Joe had a very awkward dinner with Claire that did nothing for either character. The most important scene of the episode was when Joe hit Roderick for questioning him. Roderick at this point feels like he is equal with Joe because he is the one that organized everyone and is the one keeping them safe whereas Joe is just throwing people into the meat grinder.

I almost forgot to mention Joe's "Angel of Death", Molly. She is by leaps and bounds the most deranged of "The Followers" in terms of the amount of kills she has. Molly is a nurse and kills a sizable amount of her patients because they are either suffering, terminal, or simply for being annoying. Her complete lack of remorse is frightening and she openly asks Joe to be given the assignment of tracking Ryan (in 2009). She gets close to Ryan, like P in V close, and it is revealed that the only reason she agreed to move to NY to watch him was Joe had agreed that she could be the one to kill Ryan. She is a big player in the series and its going to be exciting when Ryan finally finds out that she is a follower.

This was a solid episode but was not nearly as exciting as the last few weeks have been. It went a long way in setting us up for the final stretch of episodes.
Posted by Unknown at 9:53 PM