The Following- "The End is Near" 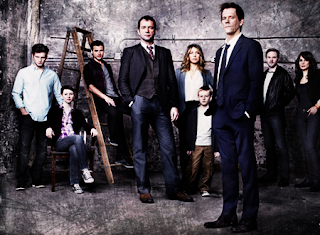 We are nearly at the end of the first season of The Following and there are so many different things to talk about. We get a few answers in this episode but there are still a ton of hanging plot threads that have not been addressed in several weeks. There was no progress on the Angel of Death storyline, the cult background of Agent Parker, the murder that Ryan committed in his past, or finding out why the "followers" are so dedicated to Joe. I realize that with one episode left we might have to wait until next season to get some closure on these threads but I can voice my need for answers.

The Jacob/Emma romance came to a conclusion with Emma slitting Jacob's throat. Just as Jacob was on the cusp of becoming a strong character he was taken from us by the queen of bitches, Emma. The writers had bungled Jacob's progression after Paul died by making him a moody "killer" with ninja-like abilities. His arc started off strong, went off the rails a bit, and then we got this episode which left us with some hope for the character. The decision to kill Paul early in the season seems like a mistake at this point because we were robbed of the chemistry between the guys and Emma, as well as their interesting backstories. Why couldn't the writers just get rid of Emma? I hate her almost as much as Betty Draper from Mad Men, give it a few seasons and Emma will likely be my most hated character of all time. I guess the greatness of a character is measured by the emotional response they get from viewers, so she is a pretty effective character that I just hate. Hopefully Ryan or Claire enacts some form of justice on her for all of the shit she has gotten away with, including killing two cops.

The Mask of the Red Death as done by the followers was fucking hardcore. Trapping a bunch of innocents in a gymnasium with the FBI agents and a few followers blending in was genius. The deaths were brutal with axes, knives, and guns being a few of the tools that the followers had at their disposal. Hardy, Weston, and Parker were pretty helpless in the situation where they had to react instead of attacking. So there were a whole bunch of people getting murdered before the FBI could even react. Parker being taken hostage and buried alive was something I did not see coming. I don't think that she is going to die but it is something that is going to mess with her for a while.

There is still a lot of things up in the air for the season finale. Is Joe going to kill Claire? Will Ryan reach Joe and Claire in time to save Claire? Will the Angel of Death remerge and insert herself back into Ryan's life? Hopefully some of these questions will be answered next Monday night. We'll see you next Monday with our wrap up of the finale and our opinion on the season as a whole.
Posted by Unknown at 9:55 PM