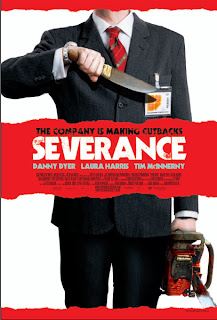 Severance may be the best horror movie that you have never heard about. It is a British horror/comedy that features a good amount of gore, interesting characters and of course a healthy dose of tits. The characters are mainly stereotypes of the average office worker. Featuring a burn-out, uptight boss, a Dwight Schrute second-in-command, a beautiful blonde American, and then others along the way. I found this on Netflix one day and it instantly became a personal favorite of mine. This is a movie that I can watch a couple of times a month and my enjoyment never diminishes.

The story and characters is what really puts this movie over the top in terms of quality. The burnout, Steve, played by Danny Dyer and the blonde American, Maggie, played by Laura Harris are the two best characters in the movie. They act realistically to the situations that they are put in and that is the key to a good horror movie, realism. If you have people walking into obvious traps and doing other nonsensical things then it kills the experience. Dyer has been in some great productions such as Doghouse and Outlaw, which both happen to be underappreciated movies in their own right.  He brings most of the comedy in the movie to life because his character is high for 3/4 of the movie and his reactions are fucking priceless. The scene of him pissing in the woods is one of the funniest scenes I can remember in a horror movie. Laura Harris is just sexy as all hell in the movie and plays her character perfectly. She is a fish out of water because she is an American with all of her British associates in the Russian wilderness. She is the only character in the movie that keeps her wits about her in every scene that she is in and gives the movie its female protagonist.

The idea of having a group of people that work for a defense/munitions company get hunted down by crazed Russian war criminals was an amazing premise for a movie of this nature. The premise just takes the "cabin in the woods" formula and tweaks it ever so slightly to create a fresh take on the genre. Everything in the movie plays out as realistically as possible in order to keep the movie entertaining and flowing smoothly. The gore and kills in the movie are pretty brutal as well and is really the moneymaker for any horror movie. Watching a guy's leg get snapped off in a bear trap is both hilarious/brutal at the same time and the movie doesn't really shy away from violence at all. Also seeing a guy get stabbed to death with a combat knife in his ass is also pretty fucking brutal.

This is an absolute must see for anyone that loves horror movies. The combo of horror and comedy makes the movie much better than your normal run of the mill slasher film. The characters and story are what really elevates this movie to being something special instead of ending up being mediocre like 9/10 movies in the horror genre. Watch this on Netflix, it is available to stream in HD and is well worth your time.