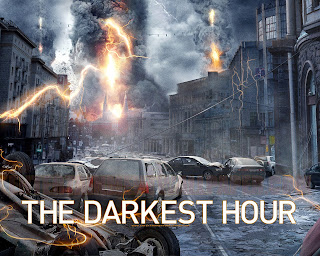 The Darkest Hour is a movie that fails to live up to a lofty premise. While I did like the film, I never fell in love with any certain aspect of the movie. Timur Bekmambetov has become a very high profile producer in Hollywood and a lot of his productions have been so-so. He has so much promise behind the camera and rarely directs movies and instead decides to have a bunch of crappy producing credits to his name. Night Watch, Day  Watch, and Wanted were all great in their own right with distinctive styles but most of the movies that he produces seem to be very flat and retain none of the over the top style his directing is synonymous with. This  happens to be really sad because his injection of style can turn a crappy movie to a good movie and a good movie to a great movie.

Most of the characters in the movie are pretty one dimensional and are not very interesting. If you are going to base the movie in Russia, use Russian actors. I am willing to watch and read subtitles if the movie is interesting. The Russian characters in the movie were the only interesting ones because they were the only ones to act rationally in the way they fought and defended their city. The Americans in the movie act impulsively and there is almost no logic behind their actions which is frustrating while watching the movie. If you can only see the enemy at night, why would you try and move across the city in broad daylight. Why would you run in the opposite direction of someone telling you they have a safe hiding place. These are things that the American characters routinely do in the movie, in direct contradiction to what the Russian characters tell them. In essence they are just being silly gooses. Sorry about that last sentence, I have been dying to use "silly gooses" for some time now. The movie really should have revolved around the group of Russians in the movie because they were engaging characters and it was interesting that they were willing to risk their lives to save their city. One of the things that stood out to me was that they said if they were all going to die anyway, then they were going to kill at least one of the aliens at all costs. Maybe sometime in the future they will have a sci-fi movie based in Russia that actually revolves around Russian characters. Just seems like it would make for a more engaging movie seeing as how Americans are usually the only ones affected by aliens in Hollywood.


A RENTAL AT BEST


The effects in the movie are pretty good, but nothing really special. The acting from the English speaking actors is pretty terrible but the Russians seemed to be having a good time with their characters and they saved the movie for me. Timur really needs to become a more active director in the industry and get more films under his belt because this movie really would have benefited if would have had the gumption to direct the movie himself. This gets a 6/10, so much potential but it fell victim to cliches and terrible directing.
Posted by Unknown at 9:52 PM