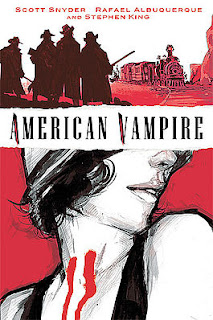 American Vampire is the brainchild of Scott Snyder and Stephen King, which is pretty much an unbeatable combo in print media. They take the concept of evolving vampires and run with the concept to the extreme. By creating an original story with great characters, readers will be able to more readily able to accept the change in the vampire mythos. The American Vampires that are introduced in the story are a combo of Blade and the vampires from Near Dark. The inclusion of the Stephen King backup story gives a great amount of depth to the older characters in the series and gives a great amount of insight into what actually motivates some of the main characters to act the way they do.

The two main characters, Skinner and Pearl, are two very interesting characters that aren't really the typical main characters in comic books. Skinner is a ruthless and brutal outlaw, who was inadvertently turned into an "American Vampire" by an old European vampire. Pearl is an emerging actress in the 1920s who is turned by Skinner in order to save her life after being attacked and fed on by a same vampires that turned Skinner. Skinner is a force of nature and just destroys anything in his path. He decimates entire towns in his path and does not have any personal tact or connections to hold him down.

The interesting part of the series comes from the idea that whenever someone is turned into a vampire they take on new characteristics according to where they are turned. The European vampires are "traditional vampires", who cannot go into the sunlight and have an aversion to wood. As of the first volume, there are not many details about the weaknesses of the "American Vampires". Their only weakness is when the sun goes down they actually get weaker. This is in stark contrast to the norm of vampires being at their strongest at night. Snyder and King craft the different groups of vampires in a masterful fashion. The European vampires are stuck up and are "old School" in their attitude and feel an new vampire line is tainted and impure. The American vampires are brash, powerful, and have no idea of their full capabilities and weaknesses. This is going to be an interesting thread as the series evolves and more and more characters are introduced.
Posted by Unknown at 9:44 PM