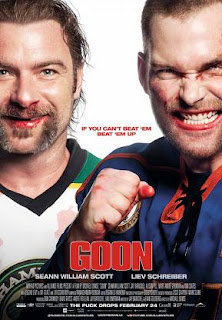 Goon is one of those movies that comes out of nowhere and simply blows all of your expectations out of the water. This movie is vulgar, gritty, and insanely funny. This has to rank pretty high up there in terms of sports movies and comedies in general. Seann William Scott, Liev Schreiber, and Jay Baruchel absolutely kill it in this movie, and it definitely signals the comeback of Seann William Scott who has had some career trouble ink the last few years. This movie also surprised me because it was coming from the mind that brought us Take Me Home Tonight which was one of the worst movies of 2011. I promise you that this movie will make you laugh out loud at least 5 to 6 times throughout the course of the movie.

Seann William Scott and Jay Baruchel form the heart of this movie because Jay's character, Ryan, is there to support Scott's character, Doug, as he is trying to find his path in life. Where as Doug protects Ryan from any outside physical harm. Doug is not a smart individual and he finds that fighting is his calling and that is what he focuses on after being hired by a local minor league hockey team. He is a very nice and polite guy trying to find his place in the world and he really enjoys the fact that he is good at something and part of a team. Scott really does show off the ability to act subtlety which you rarely see from him in any movie. This is a welcome change of pace from his Stifler character which became kind of grating after the second American Pie movie. I really hope that this movie leads to bigger and better roles for Seann William Scott because he really does have a great amount of talent but he gets typecast as "Stifler" type characters most of the time. Liev Schreiber also deserves a lot of credit for his role as an older "enforcer" in the league. His character is just a mean son of a bitch who has been doing what he is doing for most of his life. His major goal is to not go out like a pussy and he will go through anyone to make sure that this does not happen. It was also surprising to see Schreiber in a comedy because I am so used to seeing him in dramatic roles. He does not have much in the way of a comedic role but he does play a huge part in the movie as the lead protagonist.

This was also Baruchel's first feature length writing gig and this was quite the debut. You can see that he has taken a lot from the movies that he has appeared in that have been produced by Judd Apatow. He is going to be a successful screenwriter if he is continues to grow and learn from his first script. I hope that this movie leads to more independent comedies like this being made in the future because this was really a gem.

Verdict
THIS IS A MUST SEE FOR SPORTS FANS


This is a sports movie that really needs to be given a larger opening so it can get to the masses. Goon is one of the funniest comedies that I have seen in sometime and this is the best movie that I have seen all year and it will probably take a while for something to make me laugh as much as I did during this movie. It is certainly the best Hockey movie ever made and that is coming from a fan of Slap Shot and Miracle. Rent this one on any VOD service and you will not be disappointed.
Posted by Unknown at 9:27 PM