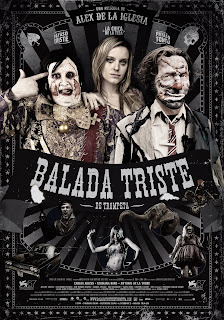 The Last Circus is easily one of the most over the top and disturbing films of the year. There is absolutely no subtlety to this movie at all, there is ultra-violence and some of the most perplexing sequences I have ever seen in a movie. I really felt like Hobo With a Shotgun was the craziest movie I had seen all year until I was witness to this movie. I can only describe what goes on in the movie because I know nothing of any of the actors and have never heard of the director of the movie before. This movie mainly consists of scene after scene of pure insanity with a little bit of odd emotionality. The main characters in the movie are strangely unappealing to the viewer, as the "main" character become more and more unhinged and finally snaps towards the end of the movie. This is a movie that really made me say "what the fuck is going on", multiple times and I'm usually really good at following the most convoluted of plots. But this movie really did have a lot of scenes that were shocking or were used to make the viewer uncomfortable. The best part of the movie was the first 10 minutes of the film with the machete wielding clown that takes out an entire regiment of soldiers. It was a beautifully shot movie but it was not really a great movie in my eyes. It was a good foreign "horror" film but it really didn't appeal to me. I could not sympathize with any of the characters and the only characters in the movie with any common sense are the background characters. I would give this movie a 6/10, not really that great but it is a beautifully shot movie.
Posted by Unknown at 9:17 PM